Raising three teens is like riding a roller-coaster that you have both anticipated and feared. You feel like you are ready until the ride starts moving, at which point your mind begins screaming for somebody to let you off, but it is too late. So you close your eyes and hold on tight, terrified, but hoping the exhilaration outweighs the fear.

Mostly, you wonder if anybody will make it out alive.

While I expected some aspects of raising teenagers before my kids reached that milestone, others caught me off-guard. Here are five of the surprises: 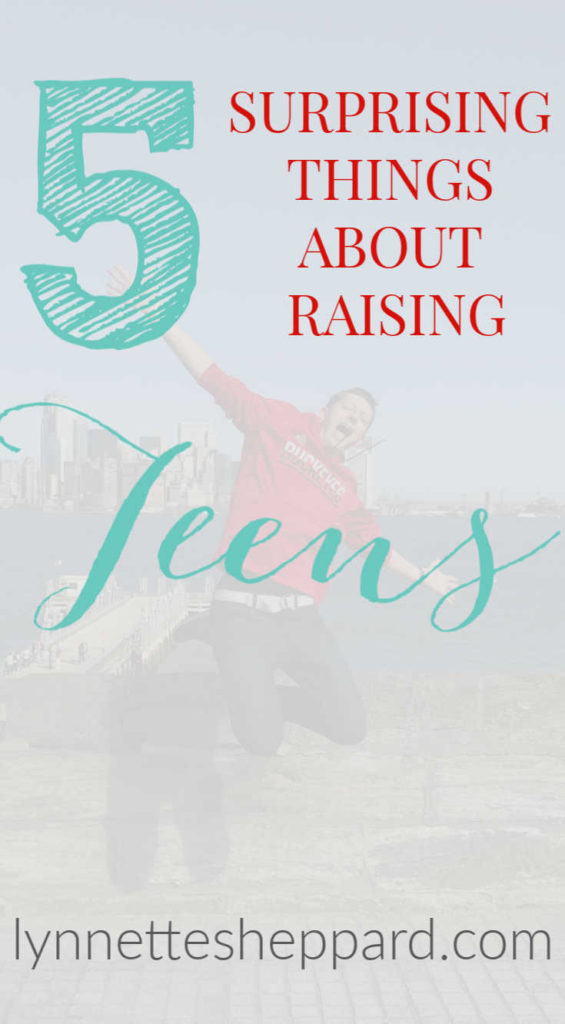 1. Boys have mood swings too

I knew that teenage girls were an emotional mess, but I was not expecting my boys’ emotions to be all over the place. Their mood swings are, perhaps, not quite as frequent as you would expect from girls, but no less dramatic. It is not uncommon for stomping, door slamming, eye-rolling, and exaggerated statements of perceived fact (“My life is ruined!”) to be followed by fits of laughter a few minutes later.

For my boys, this excitement started around age 11 or 12. When my oldest went through it, I remember thinking, “What is wrong with you, boy?!?” having no idea that this emotional upheaval was the precursor to teenagehood.

The mood swings got far less frequent in the years that followed. Now that my boys are 16 and 18, the emotional drama is (mostly) a thing of the past.

2. Teens stay up later than I do (so alone time is hard to come by)

I am a morning person through and through, loaded with energy in the morning and drained of it by dinner. When I had little kids, I was religious about their 8:30 bedtime because I NEEDED some time to decompress and relax or I became one cranky mom.

Now that a majority of my kids are teens, my evening relaxation ritual is virtually non-existent. They are often still buried in homework at 8:30.

Until a few years ago, we sent them to their rooms to finish homework if they were still awake at 9:00, which gave Greg and I a little bit of time together before heading to bed. We cannot do that anymore, however, because 95% of their homework requires a computer, which we do not allow in their bedrooms.

Consequently, Greg and I have very little time together without the kids, the TV rarely goes on during the week because there is homework strewn all over the living room at all hours of the night, and I often go to bed before my teens. I do not miss the TV in the slightest, but I do long for uninterrupted time with my husband. So…

3. Date nights with my spouse have become a lifeline

My marriage is my top family priority, even higher on the list than my kids. The kids take up more of my time and attention because there are five of them, so it would be easy to allow my relationship with Greg to grow stale.

To keep our marriage alive, we make weekly date nights a priority. That often means that our kids must rearrange their plans or find rides to activities or parties, but we are generally uncompromising on this particular aspect of parenting.

Our marriage is too important to be neglected during these hectic years.

When my kids were young, I learned the hard way that too many activities caused an abundance of stress for the entire family. So I chose to simplify, doing my best to keep our schedule as open as possible to allow time for exploration, relaxation, and play.

That was one of the best parental decisions I made in those early years, but it is more complicated now that my kids are teenagers. I want them to be able to do things that are important to them, so I give them a little more freedom to choose their activities than I did when they were young. (Not to mention that colleges want to see evidence of high school involvement.)

The result of that decision is two-fold. I see them thriving and finding their place in high school in ways that would not be possible if I did not allow them to be involved in extracurriculars. But those teams, musical groups, and drama casts often practice numerous times a week for several hours each. Multiply that by five kids, and schedules get a little crazy.

I try to remember that this stage is temporary, which helps give me much-needed perspective. And, through the craziness, I do my best to make sure my teens have some downtime to recover from the stress and busyness of high school life, even if that is only one day a week where we do nothing but go to church. (Thank you, Sunday!)

5. Teens are engaging and fun

There was a time when I was terrified of watching my kids grow up because people always told me to “just wait until they are teens,” like it was a death sentence. Now that I have been in this stage for several years, I can tell you that most teenagers do not deserve the negative reputation that society has handed them.

Yes, they can be difficult, self-absorbed, and moody, but they are also funny and engaging. They are smart and observant. They make interesting conversationalists. They want to make good choices, even though they sometimes make mistakes.

Teenagers are generally incredible young people who make life amusing. At least that has been my experience, and raising them constitutes my favorite stage of parenting so far.

While raising a teenager (or three) can sometimes feel like walking on a minefield because of the ups and downs of this period, knowing what to expect is half the battle. Hopefully, these five things have given you a little peek into the joys and challenges of this stage of life.

What would you add to this list? If you have (or have had) teenagers, what surprised you? Let me know if the comments section.