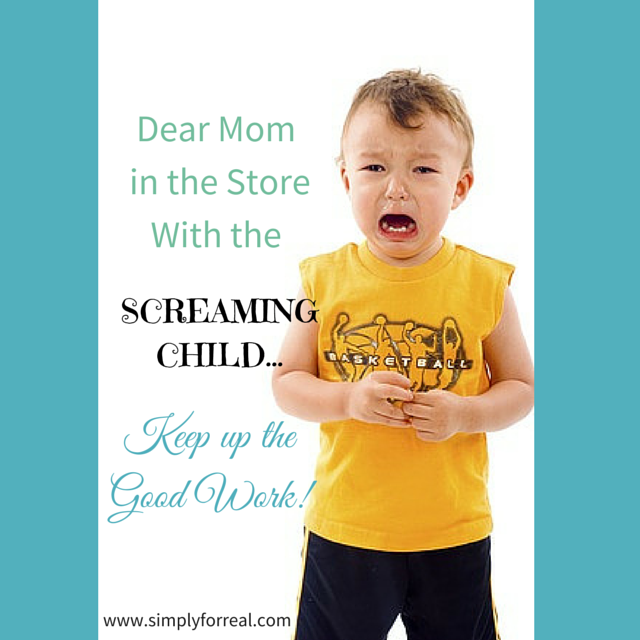 Dear Mom in the store with the screaming kid,

I saw you today in the snack food aisle. I watched as you passed the Oreo’s, and your cute little toddler asked you for some cookies, while your other child who was maybe five years old was pulling boxes of graham crackers off the shelf, and the baby who was in a carrier on your chest started to cry.

I was not trying to be nosy, but I could not help overhearing your gentle, but firm, response that Oreo’s were not on the list this week. I saw the scene that ensued after that, with your happy toddler becoming wildly upset in the blink of an eye. I saw him kicking and heard him screaming over and over at the top of his lungs, “I WANT OREO’S! BUY SOME OREO’S MOM!!!”

You stood your ground. You didn’t give in and buy the Oreo’s. You tried to calm the crying baby and screaming toddler while putting boxes of graham crackers back on the shelf, and then continued with your shopping…at a quicker pace than before.

I continued on my way, but heard the screaming throughout the store. I passed you a couple more times, and noticed that you were looking frazzled and trying to avoid eye contact. I saw the dirty looks that other people gave you, and heard the comments that they mumbled under their breath. Quite honestly, I wanted to give them a piece of my mind.

They probably had no idea that bringing your children to the store with you was the LAST thing that you wanted to do. They probably didn’t realize that your husband was in graduate school and never home, your family lived in another state, and bringing your children to the store to get what you needed was the only real option that you had. They likely didn’t know that you were doing your very best to teach those kids that they would not get what they wanted by throwing a tantrum…even if it was in the middle of the store. Yes, it would be best to leave your cart, take your children out of the store until they calmed down, and then try again. But, in all reality, I’m sure you could not swallow the idea of leaving a full cart of groceries when you were almost done getting what you needed, only to try again later and hope for better results.

I totally get it.

They may not understand, but I do. So keep up the GREAT work.

Keep standing your ground when tantrums about cookies, candy, and toys arise in the store. I promise that giving into those things to keep the peace will only make the problem worse in the long run. You are doing the right thing, even if it makes them scream…and even if there are people who give you nasty looks and mumble under their breath about how you need to learn how to handle your children in public. Never mind them. You are doing the very best that you can, and I applaud you for your efforts, which will surely pay off in the long run.

This stage will not last forever.

A Fellow Mother Who Has Been in Your Shoes