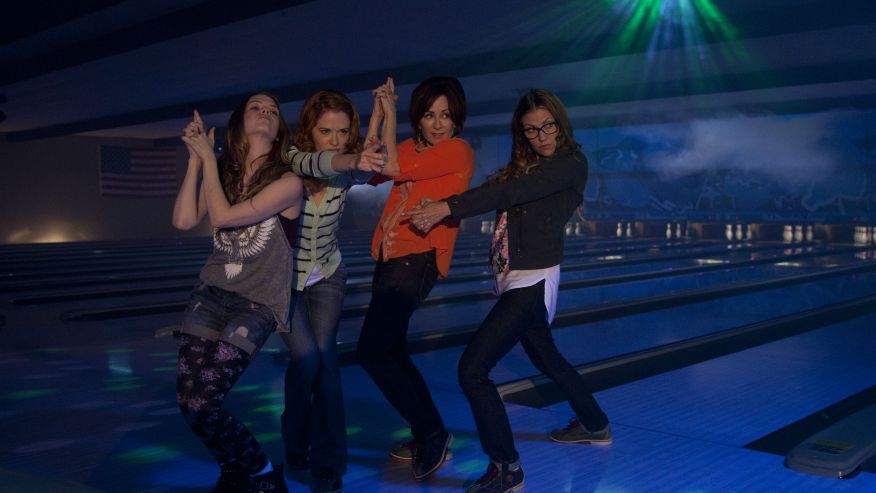 I recently went to see the movie “Mom’s Night Out” with Greg and some other friends. I laughed until I cried…and loved it. If you haven’t seen it, it is about a couple of stay at home moms who plan a night out so that they can recharge from the stress of raising children. Everything goes wrong, and their night out turns into a bit of a nightmare. Exaggerated…yes. Hilarious…yes.

But, I can relate.

Apparently others cannot, because it is getting some pretty harsh criticism. One report said:

The Globe and Mail’s Kate Taylor pondered why the central character, Allyson (portrayed by Sarah Drew), “doesn’t just hire a nanny, find a job and get out of the house.”

TheWrap.com writer Inkoo Kang called both the movie and Allyson “anti-feminist” and said her “lack of a profession consigns the character into Eisenhower-esque irrelevance.”

And Neil Genzlingermay of the New York Times concluded that Allyson is “an insult to the millions of women who have much more to deal with.”

But are these reviews a punch-in-the-face to the millions of women who stay at home to raise their families?

The most recent data from the Census Bureau shows that the number of stay-at-home moms has increased in the U.S.; in 2013, it was reported to stand at around 5 million. Twenty-four percent of married-couple families with children under 15 had a stay-at-home mom, up from 21 percent in 2000.

A movie about the challenges of being a stay-at-home mom is seen as all of these horrible things, while movies about completely immoral things are accepted. I don’t understand.

Granted, I always knew that I wanted to have a house full of children. I wanted to stay at home with them. I couldn’t imagine handing that responsibility over to anyone else. At least 24% of American moms with kids under 15 agree with me. Does that make us irrelevant? I imagine that there are many more who wish they could stay at home, but financial pressures dictate that they must do otherwise. I understand that staying at home with children is not for everybody…and that some moms just can’t make that work…but that doesn’t make those of who can (and want to) any less relevant or important.

Many of us, like me, are college educated. We are smart. Our degrees may not be used in the business world, but that does not mean that they are wasted. Perhaps someday we will go out and “work,” (as if working at home is not work…) but until then, our knowledge and skills are being put to use in a different way. It takes a variety of skills to raise children and run a household. It is not for the faint of heart. Sometimes it is crazy hard. Sometimes it is lonely, unappreciated, monotonous work. But, that does not make it unimportant.

When my kids were young, my husband was in graduate school, and I rarely got a break from the demands and responsibilities of raising children, I sometimes wondered why I had chosen this path. There were times when I felt completely overwhelmed. I was exhausted. I was tired of being needed all the time when what I really needed was some time to myself…without children clambering for my attention. I didn’t want to mediate arguments. I didn’t want kids climbing all over me all the time. I didn’t want to attempt the grocery store with three or four young kids in tow…and the looks…often unkind and impatient looks…from others whom I was “disturbing” while attempting to get some milk and bread. I wondered if I was supposed to be enjoying myself, knowing that time would pass quickly and that this needy stage would soon fade into the past…because I was often not enjoying myself. I was just trying to survive.

But, you know what…I don’t regret one moment of it…because motherhood is noble, important work. Even if I could, I would not go back and hire a nanny so that I could get a “real job.” I’m glad that I was the one there kissing their bumps and bruises. I’m glad that I was able to be there when they woke up from their afternoon naps and came to snuggle on my lap until they were not quite so groggy. I’m glad that I was able to witness the daily moments of joy in between the tantrums. I’m glad they knew that I was always there. It was a sacrifice…and a huge blessing that shaped my life, as well as the lives of my kids. Those difficult, beautiful years shaped me into who I am today. I am more patient, more empathetic, more aware of the needs of others than I was before. I know that I am capable of doing hard things…and that hard things don’t need to suck away joy…that moments of joy come in the midst of such difficulty. One minute you may be dealing with a screaming, unreasonable toddler, and the next moment that same kid will be hugging you like you are the most important person in the world…and your heart will melt…and you will realize that everything will work out.

Now that my kids are all in school, the dynamic has changed a little. I could potentially go get a job if I wanted to, and I have considered it. But, I hesitate. Because I still want to be here when they head out the door to school…and when they come home. I want to hear about their day while it is still fresh in their minds…before they move on to something else and forget about the good parts. I want to have time to go help in their classrooms at school. I do not want to give those things up…they are still important to me. It is nice to have some time to myself…to think…to write…to recharge. That is a wonderful thing. But, I sometimes miss the craziness and almost welcome it in the afternoon when they all get home. It has become a part of me. And I love it…not every moment of it, mind you. That sounds good, but isn’t reality. Some moments are simply not very lovable. However, the overall experience is one that I wouldn’t trade for any amount of money…or corporate success…or time to myself…

It does not suffocate me. It enlivens me. It is not oppressive. It teaches me all sorts of things, and allows me to be instrumental in teaching my children about the things that are important to me. It is not “dangerous” or “grotesque.” It is beautiful.

And it is the role that I choose. That, in and of itself, proves that it is not “depressingly regressive,” at least not to me.

I treasure it…challenges and all.