I have a love/hate relationship with social media. It is nothing short of miraculous that we can connect with hundreds of people at once, easily nurture friendships that would have likely been neglected before its inception, and spread uplifting messages around the world with a single click. Nevertheless, it can also be a place where focus on self plays center stage, often leaving restraint and tact in its wake. In many instances, it becomes a forum for people to say things that they would not say in a more personal setting, often leading to hurt feelings, envy, discontent, and even damaged relationships.

Feeling deeply concerned about the often unrecognized impact that some social media practices can have on people, I set out to discover how my ideas lined up with those of other social media users. I conducted a survey of 95 people, asking the following questions:

All questions except the last one included a rating scale (e.g. Not at all…moderately…I can’t stand it…etc.), as well as a comment box for elaboration. The answers to last question were enlightening enough that I will likely write an entire post dedicated to that question alone. For now, I will focus on the responses to the first four questions.

After analyzing the responses that came in, I discovered that a few people passionately agreed with this responder:

” If you are offended by what other people post, un-friend them or get off FB! Are we really supposed to think about how each of our 100+ friends will react to everything we post? That’s ridiculous.”

There were a handful of responders on the other end of the spectrum, whose answers indicated that it was extremely difficult for them to see constant streams of posts about accomplishments, activities that did not include them, and other exciting details of their friends’ lives. All people in this group reported feeling unhappy with their lives on a daily basis due to what others were posting. While most of these responders did not elaborate on why they felt this way, one included this plea:

“Not everything needs to be public information. Think it through first. If it isn’t going to help someone in some way, brighten their day, enlighten them, or bring positivity, DON’T post it!”

A vast majority of responders fell somewhere in the middle of these two extremes, saying things likes this:

” I don’t mind seeing how wonderful your kids are, but not every day. How about a monthly update?”

“I am a pretty confident person, but if I see a friend post a picture of somewhere they’ve gone with mutual friends, it rocks my self-esteem for a minute.”

“I rarely consciously feel this way [unhappy or discontent due to what others are posting], but I do think it’s probably something that is in the back of my mind a lot and has an effect on my overall happiness.”

“I just don’t understand the reason behind broadcasting to everyone else that YOU were invited and THEY weren’t, other than to build up your own ego, of course. I personally am not too offended when I see that I haven’t been invited, but I know others who have been extremely hurt by this.”

“I have a friend who has children with learning disabilities, and I know it’s painful for her at the end of the school year when everyone is posting about their kids’ awards. Does this mean parents should never “brag” about their kids? No, I don’t think so. But some amount of tact and discretion is a good idea.”

“For the most part, I enjoy seeing what everyone is up to and where they are going. Only once in a while do I think, “Wow! They’re off to Hawaii again?” or “Their own private jet?” But mostly, I just try to enjoy it all vicariously through them.”

“As silly as it sounds out loud, I feel concerned that I am not measuring up, not doing more, and not doing it ‘right’. This will usually drive me to do more, over schedule, and be even more overwhelmed/less productive.”

Some reported painful life circumstances which were aggravated by constantly seeing how perfect others’ lives seemed to be. One mom said this:

“I have boys who chose not to go on church missions. I’m happy for my friends whose sons chose to serve missions, but I can’t help feeling sorry for myself that my boys robbed me of my dreams of them serving in the mission field. It is like an arrow in my heart every time I see a mother brag about her missionary son. I know she deserves to do so, but so do I.”

She went on to explain about how she did everything she could to teach them to make good choices, but they chose to follow paths not in harmony with those teachings. This is a difficult reality for her, which is aggravated by the seemingly harmless social media posts of her friends.

Another woman related a story of how her husband was out of work around the time of their 20-year wedding anniversary. They had planned a quick trip to a nearby town to celebrate, and were brought to tears when their children presented them with a $100 bill the night before they left, along with a card that said, “Use this to eat at some nice places while you are gone. We love you.”

Although she recognized that she should be happy for the people who were planning a huge anniversary trip overseas with input from their Facebook friends, it was still a bit painful because she knew that she might never be able to afford a vacation like that, despite a lifetime of hard work.

I would summarize these responses, and many others like them, with this plea (in my own words):

“I want to know what is going on in my friends’ lives, and I try to be happy for their success. Sometimes, however, I struggle with my own insecurities, which leads me to feel hurt by some things that they post. I understand that this is my weakness and my problem. I promise you that I do not like feeling badly about others or myself, and I try not to feel this way. Yet, sometimes my feelings get away from me anyway. Feelings are funny that way. I realize that I could choose not to participate in social media, but I do not want to be completely out of the loop, either, which is exactly what would happen if I were to give up that part of my life. I will continue to work on overcoming my weaknesses and insecurities, but it is a struggle that may take me some time to win. In the meantime, it would sure be nice if my friends would be aware that there are many people just like me who feel this way, and be more mindful of what they post online.”

Having lived through years of feeling like I was drowning in my own insecurities, I can tell you with absolute assurance that those who truly struggle with similar feelings cannot simply turn them off because somebody tells them to do so, or because they should be happy for others instead of feeling hurt. I can tell you that they HATE feeling insecure, and want nothing more than to be at peace with themselves, but it is not that simple, friends. Those weaknesses can take YEARS to overcome. Does that mean that people who struggle in this way should just “get off Facebook (or Twitter…or Instagram…)” until they overcome their insecurities? I don’t think so. We cannot dispute the fact that we should all stop playing the comparison game, stop being envious of others’ happiness, and learn to be more content with our circumstances. However, we should also work on being a little more aware of others, a little more understanding, and a little kinder.

While 85% of people surveyed reported that they usually or always think before posting online, perhaps we should ask ourselves the following questions before posting in the future:

Does that mean that you should consider how your words might affect every single one of your social media friends every single time that you post? Not necessarily. Once again, most people want to share in the happy details of your lives…in moderation…when they are presented tactfully and not in a self-aggrandizing way. I think the solution can be summed up in two simple words: 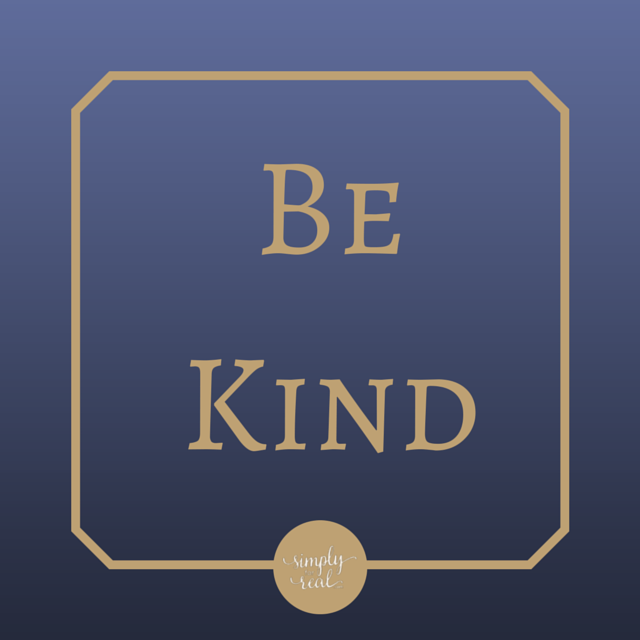 The reality is that many people struggle with insecurities in silence. While we are all at different places along the path to overcoming those, each of us could be more aware and considerate of others’ feelings. Freedom of speech should not overshadow courtesy, kindness, or the Lord’s commandment to “Love one another as I have loved you.” (John 15:12) We would all do well to consider the words of the following anonymous poem: 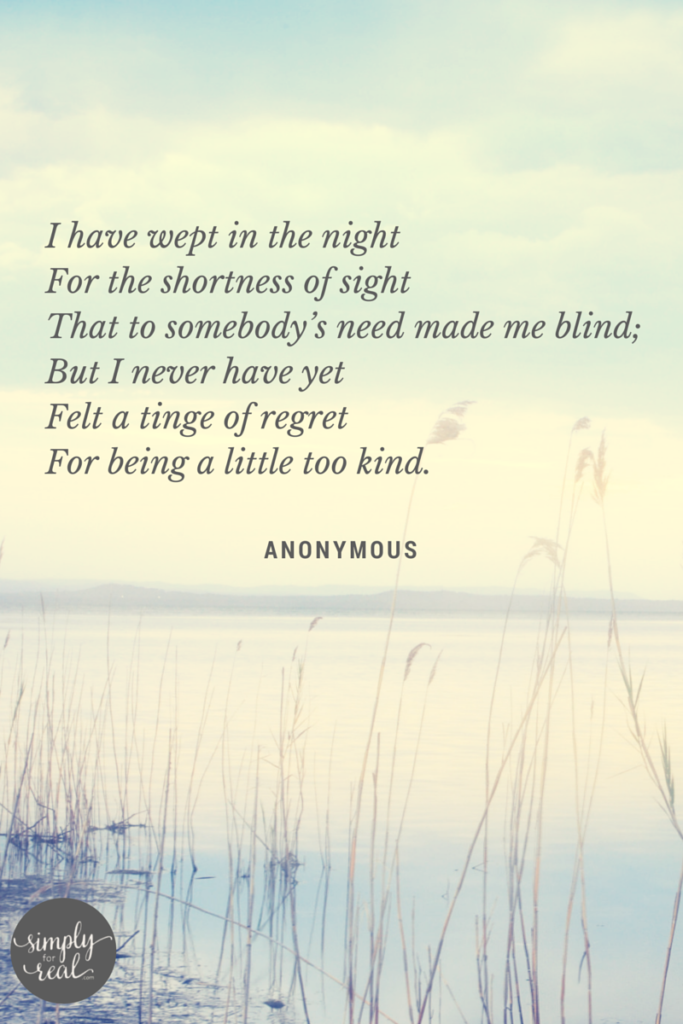 So please be kind…not only in person, but also online, and teach your children to do the same. Together we can make social media a more considerate and uplifting place…one post at a time.

Tweet
Pin6
Share58
64 Shares
« 5 Simple Ways to Connect With Your Kids
Thankful For the Ride…Delays, Sidetracks, and All »