Some people think I’m a crazy parent: too strict…too old-fashioned…not sensitive enough…yadda, yadda, yadda. A few years ago, one person told me to my face that I would probably ruin my kids in the long run.

But I will let the naysayers be. I’m pretty comfortable with my craziness.

It may be true that my parenting methods go against the grain in today’s culture because, for starters, I’m not a fan of “positive parenting.” I do not believe in ignoring bad behavior and incentivizing good behavior. I do not believe the family should be a democracy where children and parents get an equal say in decisions and discipline. I absolutely don’t make decisions based upon what will make my children happy or give them a magical childhood.

Instead, I require my darlings to do a whole lot of stuff for themselves, even though they are “busy” with school and extracurriculars. I expect them to be obedient and respect others, starting with their parents. Discipline is a part of that equation, which is a surefire way to make them unhappy, at least temporarily. And, to top it all off,  my husband and I are the healthy authority figures in our home. (Translation: we are in charge, not the kids.)

I have not always been this way. Having graduated from college with a degree in Family Science, I read the research and tried to glean what wisdom I could from it. I was going to be the best positive, authoritative parent there was because that is what my professors touted as the gold standard.

My first baby was born just two weeks before I graduated from college. He screamed himself hoarse on the first night home from the hospital, letting me know that I was in for a wild ride. Over the next few years, I read every positive parenting book I could get my hands on. I tried ALL THE THINGS to manage my son’s insanely strong-will.

Timeout as a discipline strategy was a joke. It resulted in exactly zero percent improvement.

Excessive praise was fake and contrived. Also, it did not help.

Charts and rewards for good behavior worked only until the kids tired of the rewards. Then I had to up the ante or behavior deteriorated in a hurry.

After a few years of being a “positive parent,” my kids were out of control. They were running the show and walking all over my husband and me. The oldest, especially, was on the road to prison because he was so awful. THAT IS NOT A JOKE OR AN EXAGGERATION!!! We were in serious trouble. When our oldest was seven, my husband and I came across parenting guru John Rosemond and decided to overhaul our parenting. Though skeptical of Rosemond’s old-fashioned (by his admission), common-sensical methods at first, we were at our wit’s end, and willing to try just about anything. We threw all of our psychologically-based parenting ideas out the window and started from scratch, determined to claim our rightful place as authority figures in our home.

The transition did not go smoothly. It took the kids a little while to realize that we were serious and behave accordingly. There were bumps, hills, and potholes along the way as we learned how to guide our family and teach our children with love and leadership.

However, in time, as we stayed the course and gained confidence, we began to see significant improvement. The kids were no longer winning the war. There was more peace in our home, and we were all happier and more relaxed.

Of course, my husband and I have since been through many tough parenting stages. We have not always handled things in the best way we could have. We make mistakes all the time, but those mistakes do not diminish our parental confidence, do not throw us off-course, and do not permit the kids to walk all over us. They are the result of being human. Nothing more; nothing less.

And that little boy whom I thought would end up in prison is now a model young adult in every sense of the word. There is no hint of his former awfulness. Not one person who knows him now believes me when I tell them how horrible he was in his early years. His greatness was always within him. It just took him a while to access it by learning how to listen, obey, and respect others, starting with his parents.

I credit much of his transformation to the no-nonsense parenting methods we learned from John Rosemond. They worked (and continue to work) beautifully and were a literal Godsend.

While there are those who think I am crazy, require too much of my kids, don’t praise enough, am too strict or mean…and so on and so forth, I will keep on doing my thing. And I will continue to teach other parents the principles I believe God put in my path when I needed them most. They saved my family (and my sanity) in a very real way, and I am confident they can help many other families also.

To that end, I am about to begin training to join John Rosemond’s team as a Leadership Parenting Coach. I am excited for this next step in my journey, and for what it will allow me to offer the Simply for Real community (one-on-one parent coaching, parenting classes, webinars, seminars, etc.).

I am not sure exactly how things will unfold over the next few months, but I know for sure that this is the path God is asking me to follow right now. I am excited for the ride.

In the meantime, continue to follow along for more essays about parenting and family life. I’m going to lay it all on the table, and you won’t want to miss it!

P.S. If you are curious about the specific’s of John’s parenting philosophy, I recommend the following books: 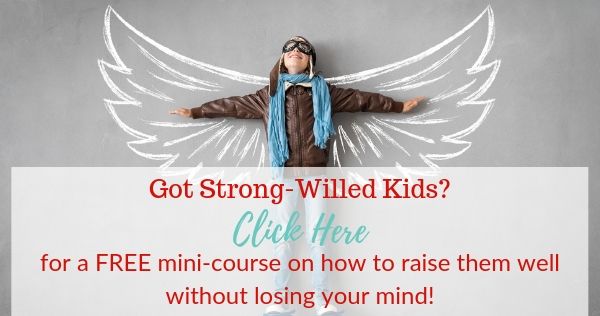 Teaching kids to listen and pay attention is the f

Last week, there was a fire on the mountain where

The tilted head is his trade mark and melts our he

We’ve got some new friends around here so I thin

Friends, I am so excited for this new course! Darl

I have always thought of myself as one who shrinks