Summer break is coming to a close here in Arizona. The heat will stick around for a few more months, but the kids head back to school this week. It has been a crazy whirlwind summer that has disappeared faster than an ice cube on the desert sidewalk; at least for me. 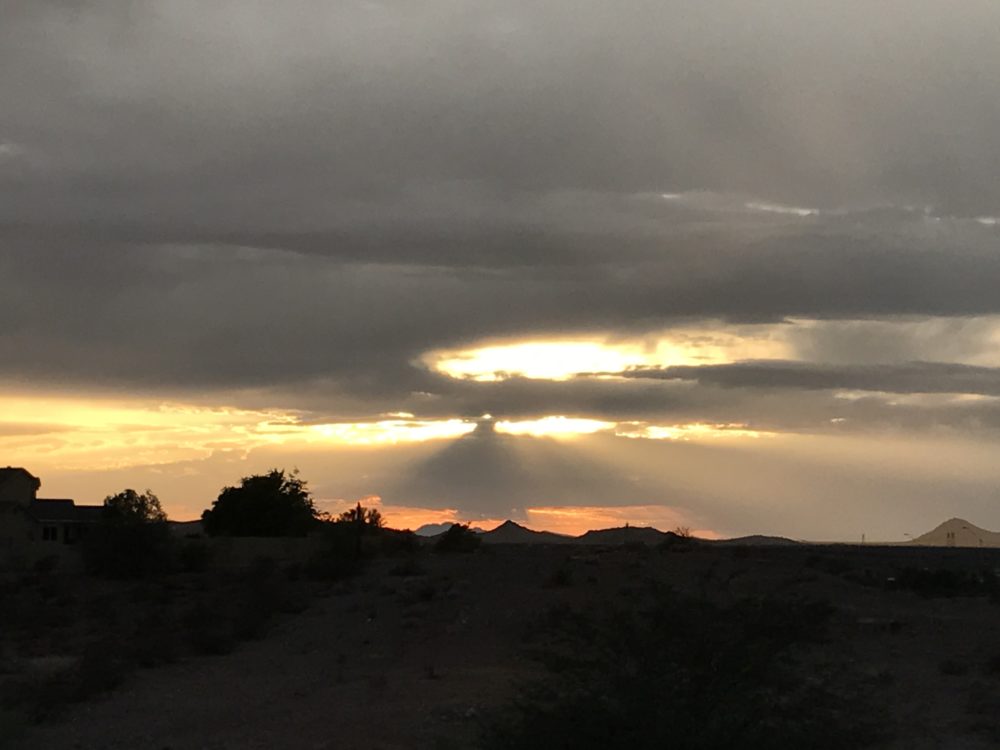 The kids are B-O-R-E-D to tears and fighting like cats and dogs because, according to them, this has been the longest summer EVER. They cannot even handle another day of each other. It’s a good thing I don’t believe in creating magical summers for my kids because they are practically begging to go back to school.

More structure; less fighting. It is a win/win situation.

For me, this summer was packed full of learning and growth amidst sending Jordan on a mission and trying to figure out where I fit in this new stage of life. Today, I am going to share some of the highlights of my summer education. You can thank me later. 🙂

1. Being a Missionary Mom is No Joke

Since sending out our first missionary a month ago, I have discovered that being the mom of a missionary is a BIG deal. I joined a Facebook group where over 16,000 moms of missionaries serving throughout the world share the joys and challenges of supporting their missionaries from the homefront. 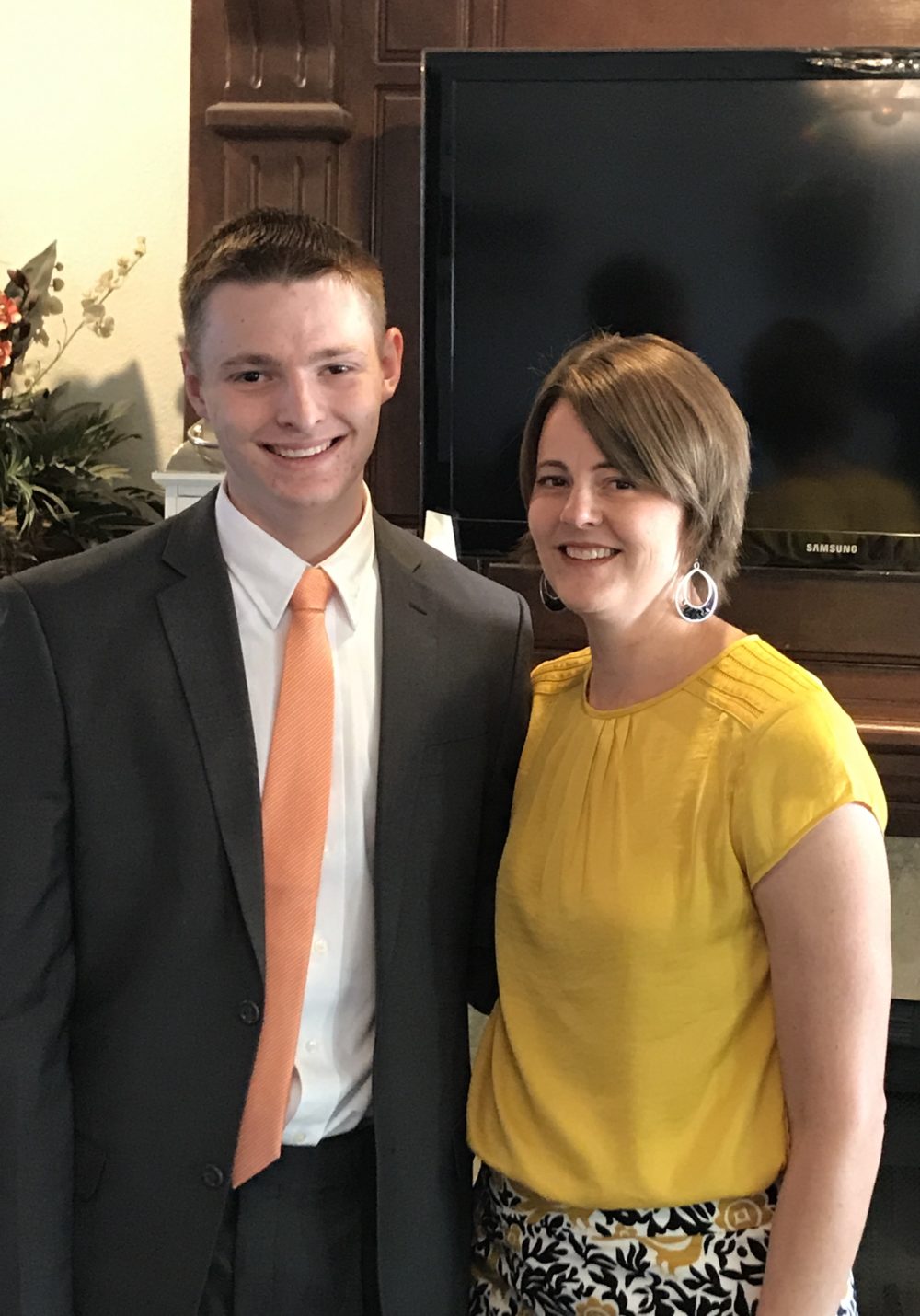 Reading the things people post in that group is pretty much like therapy. It makes me feel normal when I refresh my email every 30 seconds on Fridays because that is the day his email always comes, and I want to read it the second it gets to my inbox. Thursday night now feels like Christmas Eve because I know I will hear from him on Friday.

Strange, I know, but other missionary moms get it. We can be weird together, and I appreciate that. Plus, posts from that group fill up at least half of my Facebook feed, which means that I see less negativity and more positive support. I will take it.

Having a missionary has also turned me into a different person. I have never been a fan of car decals, but now I proudly sport this one: 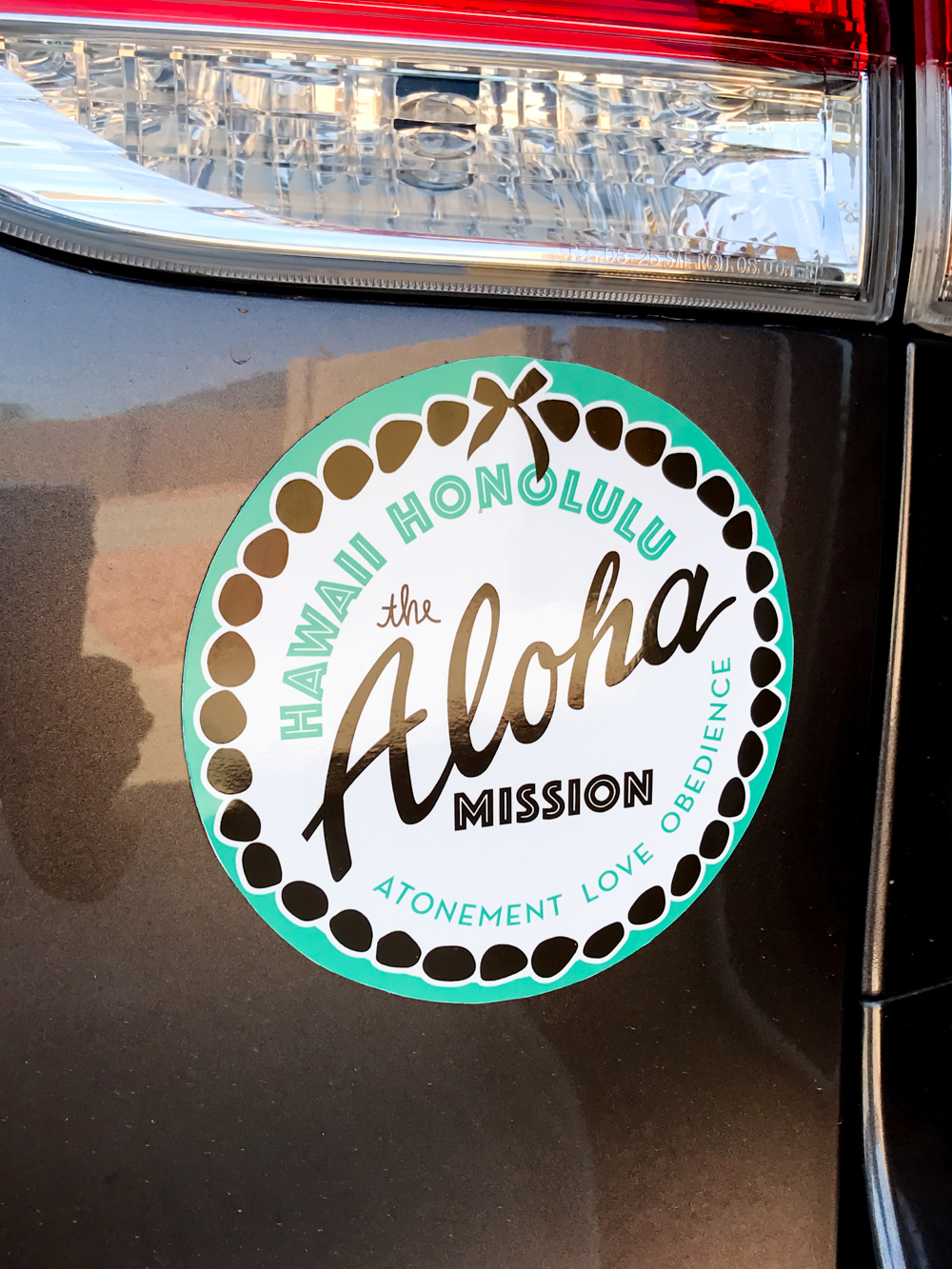 When I told Jordan about it, this is what he said:

“Mom, you are the LAST person I would expect to get a car decal. That made me laugh a bit.”

Sometimes, we must eat our words (“I will never have anything on the back of my car“) in the name of family support.

Also, it is fun to throw your husband for a loop every once in a while. He was having trouble finding our car when we went out to lunch the other day. He said, “That one isn’t ours because it has a sticker on the back.”

It keeps us on our toes.

2. Marshallese is a Tricky Language

According to Wikipedia, which we all know to be a credible source, Marshallese is spoken by approximately 44,000 people in the Marshall Islands. When we are looking at world population, 44,000 native speakers is a drop in the bucket. Well, make that 44,001 people, because Jordan is now learning to speak this largely unknown language, and it is tough! I suppose it would be hard to learn any language in a mere six weeks, but this one is throwing him for a loop. 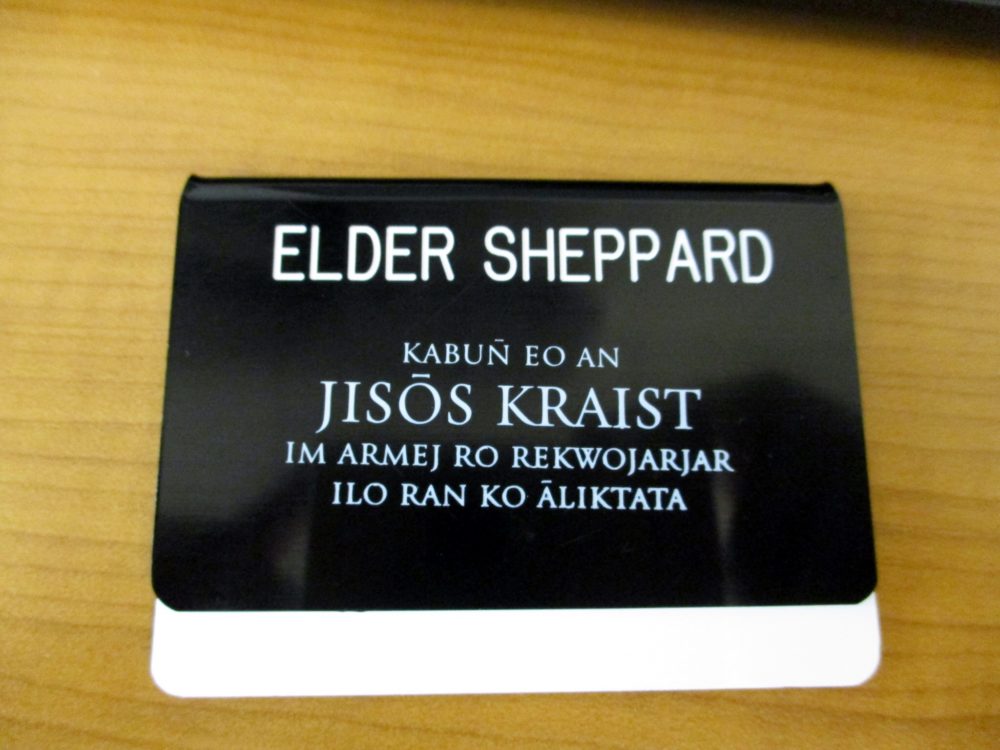 In case you were wondering, this says:

Yeah, the phrase, “of Latter-Day Saints” has eight words in Marshallese. I sent him a digital voice recorder so he could record what the language sounds like (since I don’t get to talk to him on the phone). I am trying to wait patiently for that to arrive. Patience is not my best virtue, but we will not dwell on that.

He told me that he learned more of the language in a week at the Missionary Training Center than he learned in six months of French classes at school, so it is coming along. He has about two weeks left of language training before he flys out to Hawaii to put his newly gained skills to work.

That will be an adventure.

You might remember that this was my summer to say yes as often as possible. I got a lot of requests like this:

“I want to bake chocolate chip cookies at 11:00 at night. How about we do that? (Hashtag summer of yes!)”

I do not care if this is the summer of yes; I am saying no! Plus, speaking in hashtags does not help your cause, dearest children of mine.

Trying to say yes to everything goes against every instinct I have. As I write this, my kids have pretty much forgotten about my pledge to say yes because I have “forgotten” to do it!

A healthy dose of no is, well, healthy. My kids cannot run my life with their requests, or I turn into a crazy mom. And consistently granting wishes kind of goes against everything I stand for as a parent. (No, dear child, the world does not bow to your every whim…)

So I’m back to saying no. Not all the time, mind you, but often enough to bring balance to the force. (Because children are the force, right?)

Yes, I turned the big 4-0 back in June. At that time, I was steeped in missionary preparation, and I didn’t even care about my birthday. But Greg saw fit to make it into a big deal. I sure love that husband of mine! 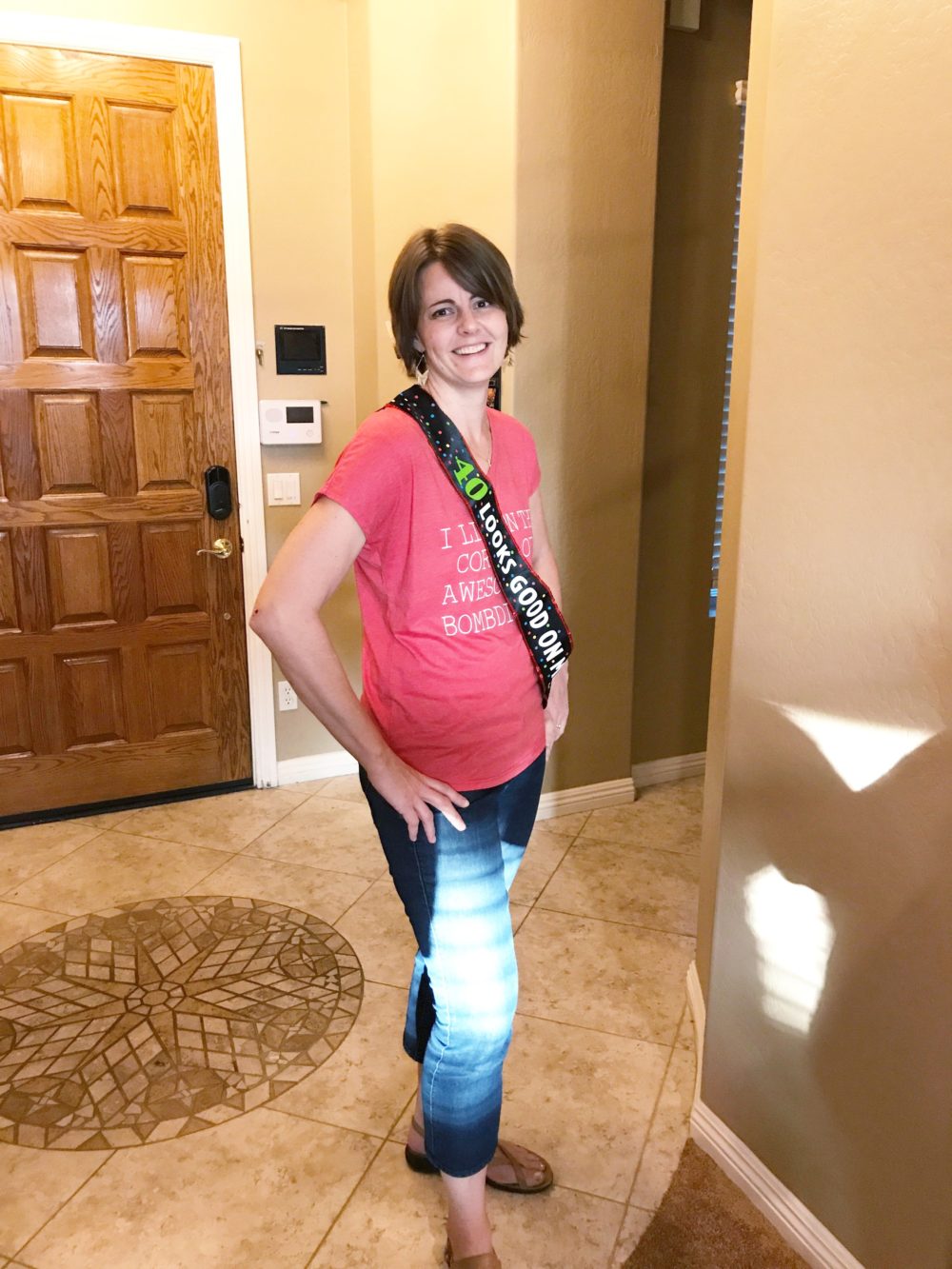 But I don’t feel any older. Except that I also celebrated my 20th wedding anniversary this summer. And I am now officially in the launching phase. But, other than that, life is pretty much the same as always, which means that I am a spring chicken. (With a few wrinkles, but that is beside the point.)

I am convinced that the older I get, the less I worry about what other people think. In that way, 40 is awesome!

Trying to get back into writing after taking a summer break has been a challenge, to put it mildly. I have been spending a whole lot of time staring at a screen with no clue what to write. Even when I think I have a top-notch idea, I cannot seem to put it into any sort of decent essay. I feel like I have hit a wall, and that is no bueno!

I am trying to give myself some grace as I navigate this hurdle. This summer has been a little crazy, after all. Plus, I haven’t had any time alone to think, let alone write, for the past two months. That might have a teeny bit to do with my inability to create anything noteworthy.

When the kids go back to school (tomorrow), maybe I will find the mental clarity I need. If not, I may start throwing in some other types of posts that don’t require quite so much thought. (Recipes will likely be making a grand comeback, but please try to contain your excitement.)

I will write my way out of this block. I am not throwing away my shot, so just you wait! (Hamilton, anyone?!? That has been another summer staple for me, and it is constantly running through my head!)

There you have it, friends, my summer of learning and growth in a nutshell. What did you learn this summer?